Meridel Rubenstein – A Santa Fe Photographer Turns Eden on Its Side 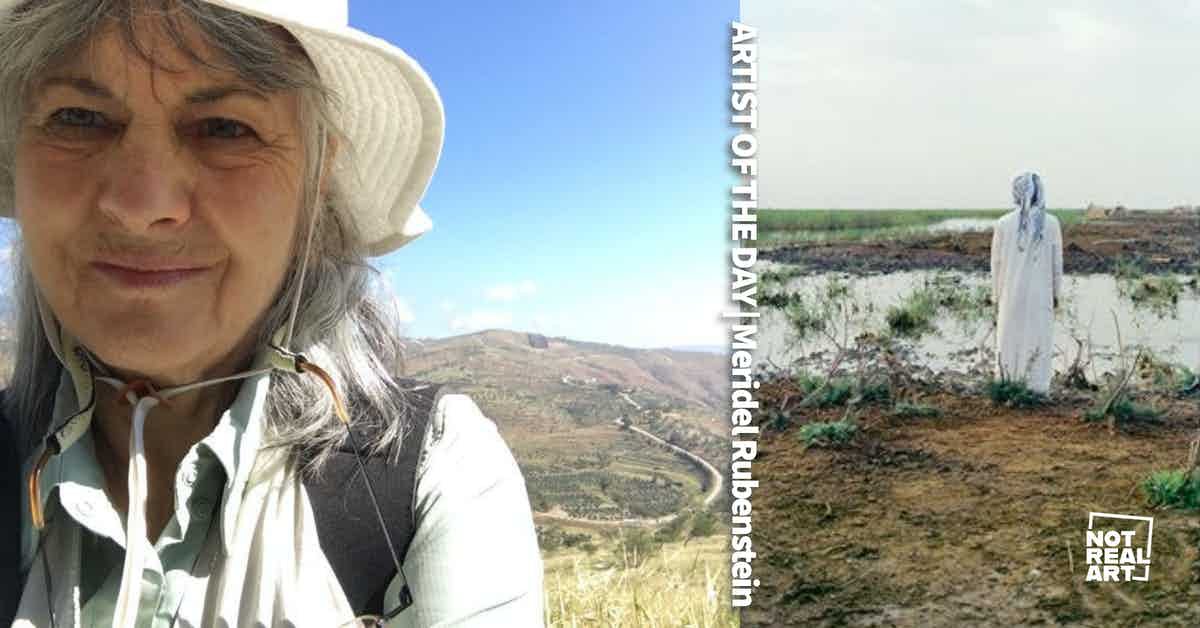 Meridel Rubenstein is a photographer and installation artist based in Santa Fe, New Mexico, who focuses on issues of art and ecology. Her recent series, Eden Turned on Its Side, includes a water remediation project in Southern Iraq at the possible site of the Garden of Eden. Her photographic composites from the Mesopotamian marshlands combine scanned medium and large-format negatives printed on linen, tapestry, metal, and aluminum.

Rubenstein is drawn to the people of deserts and marshlands. She focuses on countries where the U.S. has been involved in wars and hopes to give something back to distressed cultures. Her work is in the collections of the Museum of Modern Art in New York, the San Francisco Museum of Art, and other major museums. She received a Guggenheim Fellowship in 1982 and has exhibited her work at galleries and museums in the U.S. and abroad.

Rubenstein has maintained a studio in Santa Fe while teaching in Singapore and Arizona. Her project Eden Turned on Its Side involved creating a restorative garden and cultural heritage site in Iraq. Her immersive installations include images of the Mesopotamian Marshes, lush wetlands that were drained by Saddam Hussein. Her resonant triptych Ehmad and His Boat, Southern Marshes, 2011, depicts one of the indigenous Marsh Arabs restoring the land.

Coming of age in an era where male artists dominated the field, Rubenstein faced numerous challenges as a woman artist and often felt excluded from the conventional art world. As time progressed, she welcomed the creeping inclusion of women to the forefront, but faced the additional barrier of ageism. Like most artists, she has had to keep working intensely to find venues to exhibit her work.

Her current project: The Boat is Circle: Surviving Extinction, is based on the Mesopotamian Flood Story. The series includes sand-blasted images on mirrored surfaces of creatures, flora, or natural sites, at risk of extinction, and poses the following questions. “When Noah was tasked with selecting two of every being to save from impending extinction, his boat was large enough to take all. Is our boat as big as planet Earth? Can ALL be saved? If not, what will you reach for when the flood comes?”

Since establishing my Santa Fe studio in 1975, I’ve evolved from a photographer of single photographic images to environmental artist of extended photographic works, multi-media installations, and social practice. I have traveled away from home and studio frequently to photograph, research, and teach, most recently in Iraq, Singapore, and Sweden.

My focus has been on intersections of nature and culture in places where my country has been at war: Los Alamos, Vietnam, Iraq. For the past 10 years, I’ve added an environmental remediation project in S. Iraq, hoping to leave something constructive behind rather than to just take away photographs from which to make these artworks. I want my artwork to challenge my own anthropocentric behavior and then possibly all of ours.

My long residence in New Mexico has grounded me in this high desert land with communities of rich cultural heritages. As an artist, I address issues of war and peace juxtaposed with Nature, an enduring and thereby healing force. But what if she no longer will protect us?

A new work in progress, called The Boat is a Circle: Surviving Extinction, is a collaborative project with American artist in Sweden, Joanne Grune-Yanoff . We take the Mesopotamian Flood story, predating the Biblical Noah’s Ark, as a way to visualize how to and, who and what will, survive our current environmental and social crisis?

My art work of the past 12 years, Eden Turned on its Side, has been concerned with our symbiotic relationship with the E/earth. Focusing on Post-Edenic sites of ecological and social imbalance, the work consists of large-scale extended photographic works. Comprised of three parts, Photosynthesis, Volcano Cycle, and Eden in Iraq, ecologies are explored on the scales of human time, geological time, and mythical time. A part of my art work is social practice in the Mesopotamian Marshes of S. Iraq. Here I originated the idea, and have led a team, to build a wastewater garden, a public art and cultural heritage site, that will provide clean water, health, and beauty to a magnificent, ancient and distressed culture(see www.edeniniraq.com).

This project has put me in close touch with the indigenous Marsh Arabs as well as Iraqis at different levels of community and government from Basra to Baghdad and beyond. For those millions of migrants afloat in Europe today, the ancient marsh Arabs of the Mesopotamian marshes in S. Iraq offer a stunning example of a banished people returning home to restore their desertified land.

My photoworks emphasize the resilience of the ancient marsh people and the environmental miracles taking place in the Mesopotamian Marshes. These photoworks (2011-) are printed with uv cured acrylic inks on linen, vegetable inks on prepared aluminium plates, or woven as jaquard tapestries with cotton threads. I’ve worked to extend the boundaries of the photographic print, searching for new materials to mirror the content of the work. I learned this from earlier work I made about the Lowriders, who choose contrary materials to reference the many layers of mythic identity. My installations have served to animate my concerns and allow the viewer a more immersive experience. Moving and still imagery together add another dynamic of color and movement and an impulse towards change and transformation.

The first four submissions are from the series Eden in Iraq 2011. These photoworks made from my scanned large and medium format negatives, of the legendary Mesopotamian marshes in southern Iraq where land and people, after near destruction, are regreening their land and rebuilding their culture. They have been printed both as smaller paper prints and in exhibition large on linen, tapestry, and metal. The large work was fabricated with University funding. I begin with camera negatives that are 5×7 inches, 6x7cm, and some digital files. I scan these and then work digitally. I make the more complex composites on the computer and translate them for the different media. The Marsh Arabs developed their way of life around the resources of the marsh, once the third largest wetlands in the world- before being malevolently drained by Saddam Hussein in the 1990’s. Upon the dictator’s demise in 2003, the Marsh Arabs returned to restore their land.

This piece contrasts the marshes drained in the 1990's (the right column) and then 20% re-greened as of 2011 when I first visited (the left column). The middle column suggests the return of the ancient way of marsh life with reed dwellings and ubiquitous date palms.

This piece is bordered by flora mentioned in the Koran as being in the Garden of Eden. I photographed at the Royal Botanic Garden in Jordan in 2016 in the wild, where botanists are preserving 23,000 endangered species, all over 500 years old. The image as a whole reflects the marshes buoyant and Edenic, and also in the background negative form, destroyed. The marsh home is also Edenic, though the desert is creeping through the carpet, where I was served tea.

Inanna of the Mesopotamian Marshes is the first goddess of love, fertility, war. Hymns to her were among the first translations of cuneiform tablets. She still is revered in the Mesopotamian marshes, as Venus, the 8 sided morning Star. In Spring, Grandmothers would paint red stars on the children and sheep’s foreheads, hoping Inanna would spare them in the floods. The hexagon in Islamic art comes from devotion to her.

Meridel Rubenstein has evolved from photographer of single photographic images to artist of extended photographic works, multi-media installations, and social practice that focuses on intersections of nature and culture in relationship to ecological and social imbalance.

In 2019, she returned to her New Mexico studio after teaching, as Visiting Associate Professor, at the the School of Art, Design, and Media, at Nanyang Technological University(NTU) in Singapore, where she taught Extended Photography as well as Artand Ecology(2007-18). She is an Adjunct Professor in the School of Sustainability, at Arizona State University in Tempe, Arizona(2015-). Meridel has maintained her art studio in Santa Fe, New Mexico, producing art projects and exhibitions, both solo andin collaboration.

Her most recent work, a three-part series, titled Eden Turned on Its Side, opened at the University of New Mexico Museum of Art in early 2018 as well as at the National Design Centre in Singapore(late 2017) Her monograph, Eden Turned on Its Side, was released on February 3rd, 2018, coinciding with these two exhibitions. Rubenstein initiated and is Project Director for the Eden in Iraq Wastewater GardenProject. This interdisciplinary water remediation project in the wetlands of Southern Iraq, using environmental engineering, art, design, and wastewater to make a restorative garden for health, cultural heritage, and environmental education. These marshes are thought to be a possible site of the historic garden of Eden. Initially funded by a research grant from Nanyang Technological University(NTU) 2013-2017, in 2014 , it became an official project of the Iraqi NGO, Nature Iraq(www.edeniniraq.com). In 2020, it was designated by Unesco as one of 75 outstanding Green Citizen’s Projects.

She has exhibited internationally in numerous gallery and museum exhibitions, including at the Louvre in Paris. Permanent collections that house her work, include the Museum of Modern Art, NYC, the National Museum of American Art in Washington, the San Francisco Museum of Art, and the Museum fur Kunst und Gewerbe, Hamburg, Germany. She has received numerous grants including a Guggenheim Fellowship.

– Lucy R. Lippard, author of Undermining: A Wild RIde Through Land Use, Politics, and Art in the Changing West, has written: Eden Turned on Its SIde is a dazzling demonstration of the ways beauty (via inventive art and photography) can illuminate the earth's most crucial issues, offering hope for a different world than the one we are barging into.*

Meridel Rubenstein – on the Web And Social Media

Here is where to find out more about Meridel on the web and social media: