Jonathan Allen – Why a Ninja Artist Coopts the Language of Advertising 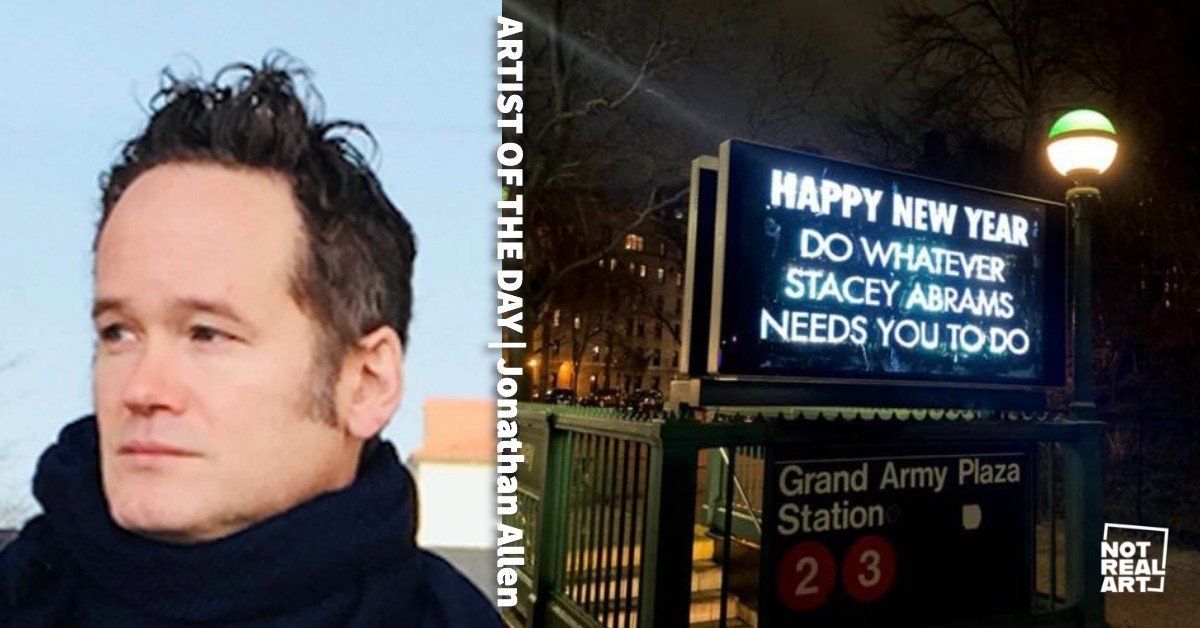 Jonathan Allen is a mixed-media artist and creative ninja who works with performance, video, and installation. His fleeting public artworks are swiftly removed by transit authorities, but live on via Instagram. Allen‘s ongoing series INTERRUPTIONS, installed in New York subway stations and on city streets, “interrupts the language of advertising” with images and text that reflect the “political and social predicament.” His prolific output since 2017 has resulted in over 270 ‘interventions’ and counting. In his spare time, he is also an abstract painter.

Since earning a BFA in Visual Arts and Art History at Columbia University, Allen has exhibited in museums and contemporary art spaces as well as on the streets and beneath the ground. He has collaborated with choreographers, dancers and poets, and done artist residencies in Italy, Ireland, and Sweden. Fueled by outrage at assaults on American democracy, and a desire to set the record straight during an era of political disinformation, Allen went on a creative rampage. His billboard-like interventions are both a coping mechanism, and a means of fighting back.

With installations ranging from commentary on right-wing politicians, violence by the police, and attempts to subvert the elections, to quotes by Congressman John Lewis and Dr. Martin Luther King, Allen’s visual and verbal responses to the fragile state of the nation are not without consequence. His overtly political approach has resulted in rejections for grants and exhibitions. He was informed by one curator that his work was “too of the moment” and might offend Republican board members.

Isn't art supposed to provoke, upset, and challenge us? The reality is that the art industry is as enmeshed in corporate forces as any other industry, and those economic underpinnings tend to be conservative and risk-averse. On a more subtle level, however, Interruptions functions outside the art industry – by existing as public art. I have deliberately chosen to work outside the gallery system, staging these interventions in public and engaging the architecture and space of the city.

In addition to his politically charged installations that share insights on current events with passersby and social media audiences, Allen creates large-scale abstract canvases. His latest series,"Whiplash," is a response to various personal crises he has dealt with over the past few years. His creative energy, and political and social activism show how vital it is for artists to find their own voice.

I am an inter-disciplinary artist, working in installation, painting, collage, video and performance. I am interested in addressing social, political, and cultural realities through my work, and using materials, media and technologies in unexpected, irreverent ways to do so. Interruptions, the work I have submitted representations of, coalesces these disciplines in a political, poetic project. Interruptions is a series of advertising interventions installed in New York City subway stations and on its streets. It seeks to interrupt the language of advertising with imagery and text critiquing and commenting on the United States' current political -and social – predicament. The series began in 2017 and is ongoing. I have installed and documented over 270 unique interventions to date. The complete series is viewable on Instagram @jonathanallenstudio. My audience is not only my social media followers, but passerby who encounter these installations on NYC streets and in subway stations.

The project only lives on digitally: the Interruptions are often removed by transportation authorities within minutes or days of their installation. This ephemerality, and disappearance of the physical work, is an important part of the project. To me it speaks to the sad futility of lasting meaningful political and social messaging in the face of advertising and its power in our capitalist society.

In the runup to the Georgia Senate runoffs, which led to a Democratic majority in the US Senate, Stacey Abrams emerged as a powerful, important voice and force in turning out the vote. This is a fun celebration of and shoutout to her, and was rebroadcast by Emily's List.

This intervention was staged last summer, in response to the Breonna Taylor controversy.

After Congressman John Lewis's death, this optimistic saying of his was often quoted, and it felt important to repeat it in a public setting.

This intervention was installed on a cold winter night, within days of the January 6 attack on the US Capitol. Both Senators Cruz and Hawley deserve blame for supporting this terrorist attack.

This is a quote by the Reverend Martin Luther King, Jr., and was installed on the 65th anniversary of the beginning of the Montgomery Bus Boycott, as a tribute.

Jonathan Allen works in painting, collage, video and performance. He holds a B.A. in Visual Arts and Art History from Columbia University, and in New York has exhibited at BRIC, Five Myles, Lu Magnus, PS122, Exit Art, Socrates Sculpture Park, Artists Space, and Caren Golden Fine Arts, among others. He has participated in LMCC's Workspace, Process Space, and Swing Space residency programs, the Bronx Museum of Art’s Artist in the Marketplace program, and been awarded residencies at the Bogliasco Foundation in Italy, Cill Rialaig in Ireland, Milvus Artistic Research Center in Sweden, and Blue Mountain Center. He is a recipient of grants from the Pollock-Krasner, Puffin, Chenven, George Sugarman Foundations and Brooklyn Arts Council.

Allen frequently collaborates with poets and performers. He has performed extensively in the work of choreographers Joanna Kotze and Kimberly Bartosik. His collaboration with poet Anselm Berrigan resulted in LOADING, a monograph published by Brooklyn Arts Press. Allen is currently at work on INTERRUPTIONS, a series of ad interventions in New York City subway stations and on city streets, which seeks to interrupt the language of advertising with imagery from our current political predicament. Video and photography of this project can be viewed on Instagram @jonathanallenstudio. Allen is on the Programming Committee of VoCA (Voices in Contemporary Art) and lives in Brooklyn.

Jonathan Allen on the Web And Social Media

Here is where to find out more about Jonathan on the web and social media: