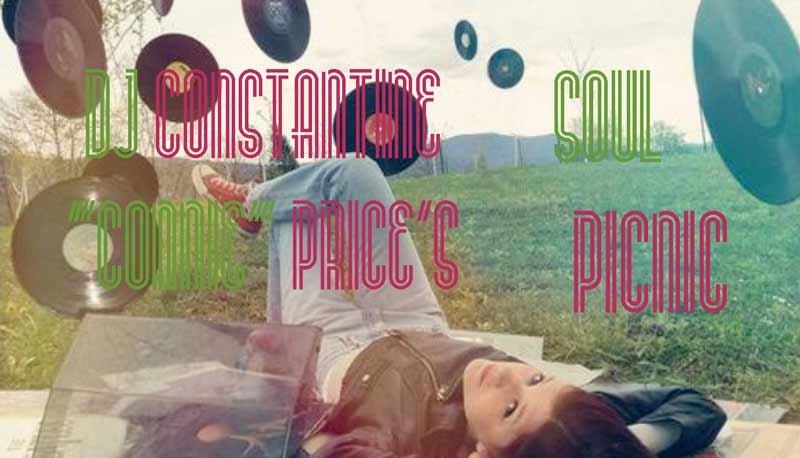 Hey, everybody. My name is Dan Ubick, but I go by Connie Price when I spin records or get behind the drum kit. Call me Dan or call me Connie (short for Constantine, my middle name). I’m a music producer, musician, and record collector from California.

I’m on a mission to share the songs that catch my ear every month on the Soul Picnic Playlist. Think of them as flavorful dishes from the kitchen’s of my favorite musical chefs. I love all kinds of music regardless of genre or era but, full disclosure, I do have an ongoing love affair with the late ‘60s and early ‘70s.

I’m lucky to be surrounded by tons of talented people who are as obsessed with music as I am. They constantly turn me on to songs that make me think, How have I never heard this before?! I created Soul Picnic so I could pass my own discoveries on to you. I hope you find a new favorite here, and it makes you smile, feel understood, or keeps you positive.

This month, as a lot of things are returning to relative normal and our weekend time gets increasingly precious, I thought I’d share a playlist of songs I enjoy throwing on as I do laundry, clean up the backyard, run errands, and/or just enjoy a day off. Take a breath, grab a cold drink, and enjoy the day.

Released on 1973’s Mystery To Me LP and penned by guitarist and singer Bob Welch, “Hypnotized” features the perfect blend of gentle and tough. Mssrs. Fleetwood and McVie laid down a solid foundation for the layered guitars of Welch and Bob Weston, who took over guitar duties in Fleetwood Mac after Peter Green, Jeremy Spencer, and Danny Kirwan’s tenures, and provided the band with this enchanting classic.

Los Lobos—“Saint Behind The Glass”

From our hometown heroes’ sixth and best-selling LP (La Bamba aside) Kiko comes this gorgeous Mexican folk ballad about the simple pleasures and trials in life growing up in East Los Angeles. Hearing Louie Perez and David Hidalgo harmonize soothes me like a religious experience and makes me feel watched over and protected every time I throw it on.

Born in Edinburgh, Scottish singer Finley Quaye found out in his twenties that his father was a Ghanaian chief and his grandfather the pianist Caleb Jonas Quaye, aka Mope Desmond. Quaye was brought up frequenting Ronnie Scott’s jazz club in London with his mother, so his musical influences are a soothing mix of jazz, reggae, and soul. His chart-topping LP Maverick A Strike is a testimony to his multicultural patchwork of styles.

Like many from my generation, I got to Rachel Sweet via Native Tongues’ extended family The Beatnuts and their slapper of a track, “We Got The Funk,” which sampled the funky rhythm guitar part from this tune off Sweet’s 1978 debut LP Fool Around. Sweet’s original does have the funk but does not talk about taking “your panties off and twist[ing] it ‘round the air like a helicopter” (creative wordplay courtesy of Psycho Les). Instead, Sweet takes us to an island getaway where “women walk in the shade with water jars … so hot, no phones or cars.” So take a refreshing dip in the water, then find a spot in the shade and relax.

Tuareg musicians Tinariwen are the soundtrack of northern Mali and the Sahara Desert with their soothing vocals, relaxing hand drumming, and intoxicating West African-based guitar playing known as assouf, but commonly referred to as “Desert Blues.” However, Tinariwen’s more rocking songs pulled from British and American rock groups like Dire Straits, Led Zeppelin, Santana and Jimi Hendrix, who’s bootlegged albums made it to the Saharan region as Tinariwen was creating their own unique style.

I have loved former Venice busker and soul man Ted Hawkins since my wife first played him for me when we started dating (check out another gem from his Next Hundred Years in Soul Picnic #004). Ted croons: “She whispers sweet nothings in my ear and tells me, ‘Baby, don’t worry I am here.’” Who doesn’t want to hear that?

Taken from McVie’s 1970 The Legendary Christine Perfect Album and a favorite of breakbeat heads around the globe, this loping soul groover courtesy of bassist Martin Dunsford and drummer Chris Harding does not disappoint. It’s McVie’s tasty Wurlitzer electric piano playing paired with her coy delivery of the lines, “I never said this before, but baby I love you. I’m a woman of very few words, and that's saying a lot,” that really pull me in, though.

On his self-titled debut solo LP from 1992, the former kingpin of The Jam and The Style Council revisited his 1960’s R&B roots, complete with congas, slinky guitars, pulsing bass, syncopated drums, and funky flute. With echoes of Marvin Gaye’s masterpiece “Mercy, Mercy Me (The Ecology),” “Above the Clouds” blows in like an autumn breeze. Weller sings, “Summer always goes so quick. Barely stopping like my thoughts. Which dip and spin and change so fast. I have to wonder, will I last.” Even the Modfather knows nothing lasts forever, so press rewind if you need to.

After the previous Paul Weller track, it’s too good an opportunity to pass on including this incredible alternate mix of Marvin Gaye’s “Mercy, Mercy Me (The Ecology).” Prior to the reverb-drenched master mixes done in Los Angeles that went down in history as Marvin’s masterwork What’s Going On, these rougher and rawer mixes done in Detroit really capture the unpolished songs as they were intended to be. We can focus on Marvin’s continually poignant lyrics, “Woah, mercy, mercy me, yeah. Ah, things ain't what they used to be (ain't what they used to be).”

San Francisco’s Jellyfish was a breath of fresh air amidst the barrage of hair metal and grunge of the 90s. Their debut LP, Bellybutton, opted instead for 60s pop hooks layered with the harmonized vocals of drummer Andy Sturmer and keyboardist Roger Manning. Record sales didn’t match the band’s lofty pop ambitions though, and the band unfortunately split after their second (and also incredible) LP, Spilt Milk. ”I Wanna Stay Home,” the album cut included here, deals with being alone (which is sometimes exactly what we need). The chorus lyric, “I wanna stay home,” could be the subtitle of this playlist.

The Pretty Things—“The Good Mr. Square” into “She Was Tall, She Was High”

From the Pretty Things’ fifth LP, Parachute, comes these two perfect puzzle pieces of late 60s pop music/character studies that open Side A. “The Good Mr. Square” starts us off with a main character who's described as not having “any hang-ups. He spends his time looking through other people's lives.” The band transitions flawlessly into “She Was Tall, She was High,” held together by the impeccable harmony and vocal power of Phil May and Wally Waller. Who this imposing woman wreaking havoc is I’m not sure, but it seems she left an impression.

Jeff Buckley is hands down my favorite thing about the 1990s. The emotion and range in his voice is matched only by the caliber of songs he wrote and covered. I cried when he left this planet like I hadn’t since I was a kid and John Lennon was shot. “Lilac Wine,” taken from Buckley’s first proper LP Grace, is as intimate as one of his early shows at Sin-é in New York. I am so grateful to have lived when Jeff Buckley was on this planet. Immerse yourself and get lost in the moment.

Taken from 1975’s exquisite Blood On The Tracks LP, “Buckets of Rain” is probably my favorite Bob Dylan song. Five simple verses extolling the virtues of the main character's muse: “I like your smile and your fingertips. I like the way that you move your hips. I like the cool way you look at me. Everything about you is bringing me misery.” Man…

Last up is a sensitive ballad by the most tasteful guitar hero ever to walk the earth, Jimmie Vaughan’s little brother, Stevie Ray. Taken from Stevie Ray’s debut LPTexas Flood, this homage to Vaughan’s wife at the time, Lenora, is as close to a pure expression of love that I’ve heard from a Fender Stratocaster. “Lenny” and Stevie ended up splitting up, but that didn’t stop the musician from naming his beloved Strat after her.

Listen to the playlist on Apple Music:

The Last Word: If you love these songs, please buy physical copies if you’re able. Spotify, Apple Music/iTunes, YouTube, and other streaming services are great tools, but streaming doesn’t pay artists a living wage. We want these amazing folks to keep making the music we cherish.

Love music as much as we do? Then check out Dan Ubick’s production company, DanUbe Productions, and drop him a line if you’re so inclined.

The Creative Economy: Knowing Your Worth in Today’s Financial Ecosystem

The Creative Economy: Knowing Your Worth in Today’s Financial Ecosystem