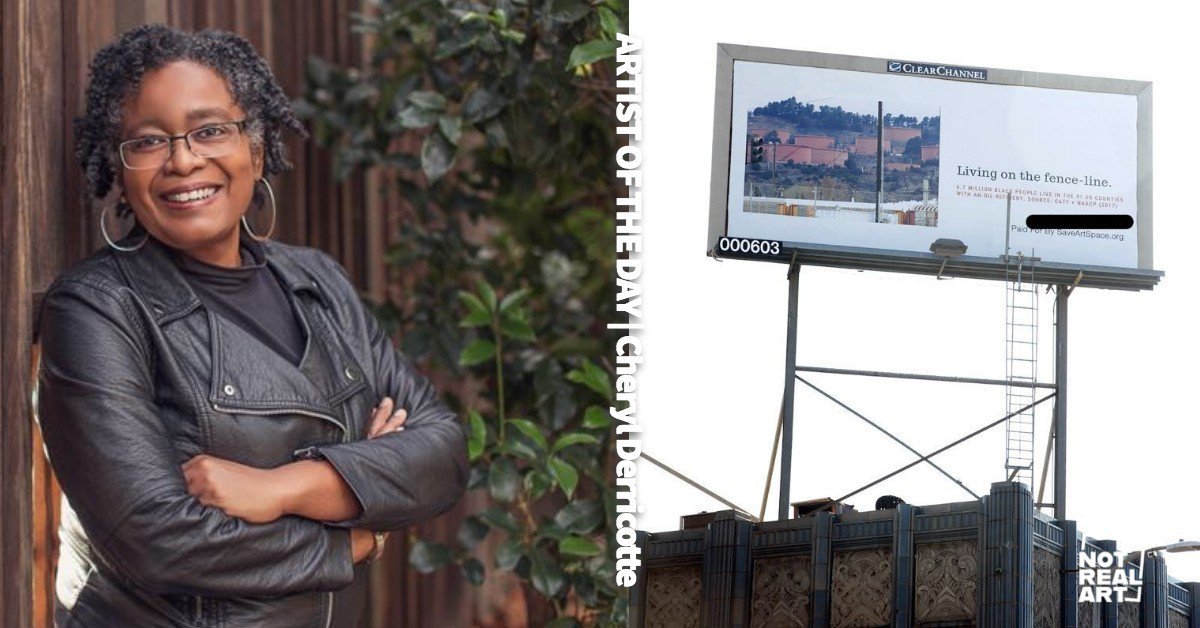 Cheryl Derricotte addresses topics many people would prefer to avoid. Originally from Washington, D.C., she lives and works in San Francisco. Derricotte was the inaugural Emerging Artist at the Museum of the African Diaspora. She was recently selected to create a monument of abolitionist Harriet Tubman. Her diverse range of media includes screen-printing, glass, sculpture, public art installations, image transfer, bookmaking, and collage. She frequently speaks about contemporary political art and considers it a "brave space" to hold difficult conversations.

Derricotte’s provocative mixed-media installations, works on paper, and historical photos embedded in glass, tackle issues from Thomas Jefferson’s ambivalent attitude towards slavery, to the number of deaths of black men at the hands of the police. Her recent series, “Pandemic Bookkeeping,” measures how her “middle-class domesticity during COVID isolation stacks up against the demands of running a middle-class Victorian/Civil War era household.”

To cope with a harrowing job in her thirties, Derricotte turned to craft making to alleviate stress. Inspired by California artist June Schwarcz, who had an exhibition at the American Crafts Museum after learning to work with metal and enamel in her forties, she gravitated to fine art and incorporated some of her craft-related skills into her work. Derricotte welcomes the expansion of political discourse in the contemporary art world and is optimistic about the inclusion of women of color.

The art world is embracing difficult conversations not just in America but around the globe! The fact that Simone Yvette Leigh, (now in her 50’s), is the first Black woman to ever get selected to represent the US at the 2022 Venice Biennale is very telling. Up until recently, there was not as wide a reception for Black women artists and politically-charged work.

Derricotte’s public art piece Living on the Fence, 2020, a billboard installed on Hollywood Boulevard in Los Angeles as part of an exhibition that included Judy Chicago, highlighted a report by the Clean Air Task Force on the number of black people living near oil refineries in the U.S. Her recent commission to create a 12-foot aluminum-and-glass monument to Harriet Tubman, exceeded the bounds of her cramped 200-ft studio; an indicator of her explosive creative growth.

I stand for art and liberation. I believe that art is the brave space to hold difficult conversations, the kind of discussions we would prefer to avoid. I got to this place through my own growth as an artist who makes art from research. This type of inquiry leads me not just to economic but also environmental concerns. Observations of current events, politics, and urban landscapes are my entry into these issues. All this results in glass art and work-on-paper.

Most often I create work in series. “Pandemic Bookkeeping” measures how my middle-class domesticity stacks up against the demands of running a middle-class Victorian/Civil War era household; “Living on the Fence-Line” took my series on oil refineries next-level in the form of a billboard on Hollywood Blvd. It paired my photograph of the Richmond Chevron Refinery with a quote about the number of Black people who live near the oil industry. Last but not least, “The Blue Wall Project” (working title) maps people killed by the police using data from the Washington Post’s “Fatal Force.”

To make my work I use a variety of glass and printmaking techniques. I enjoy layering images and text onto warm glass pieces, featuring public domain historical photographs and drawings. My preferred techniques include screen-printing with glass enamels or powder printing. My work on paper employs the techniques of image transfers, ink stamping and collage. Over the past few years I have been enjoying learning the craft of bookbinding and making artist books.

Text is an important component of my artwork. I often say that I live under the tyranny of title. A phrase will get stuck in my head and I wrestle with it until an artwork is created. Thus, many of my pieces have titles before I ever make a schematic drawing, much less cut a piece of glass or tear down a sheet of paper. I am a visual storyteller. My work weaves personal and political geography to confront contemporary society’s relationship to place and equity.

This work is part of a series highlighting Thomas Jefferson's contradictory positions on freedom. The wolf was his metaphor for the institution of slavery. This work is referencing Thomas Jefferson’s often quoted commentary on the peculiar institution of slavery: "But as it is, we have the wolf by the ear, and we can neither hold him, nor safely let him go. Justice is in one scale, and self-preservation in the other." (Jefferson discussing the Missouri question and slavery to John Holmes April 22, 1820. Ford, Paul Leicester, ed. The Works of Thomas Jefferson, Volume 12. New York: G.P. Putnam's Sons, 1905, p. 159.)

I was one of eleven featured artists, (including the legendary Judy Chicago), in a tri-city public art exhibition entitled “Whistling in the Dark.” This billboard of a new artwork I created was installed this past February, 2021 in Los Angeles on Hollywood Blvd. This work pairs my own photo of the Richmond, California Chevron Refinery and a quote from a Clean Air Task Force/NAACP report about the number of Black people, (6.7 million), who live near an oil refinery in the US.

Bullets symbolizing the deaths of Black men from police brutality are hand-stamped in blue ink on a wall calendar. This work was featured in the de Young Open Exhibition, fall of 2020; was profiled in the California Today section of The New York Times; the Guardian and the San Francisco Chronicle. The work was acquired by the Museum for the permanent collection.

My new series, “Pandemic Bookkeeping” shares an assessment of how I stack up against the standards of running a Victorian/Civil War-era middle class household that haunt us today. It is not lost on me that I would occupy the position of servant on either side of the Atlantic “pond” in the 1860’s. Last year, 2020, often felt like I woke up in a Dickens novel in the middle of the Civil War. Like it or not, I am occupying the precariously demanding positions of mistress, housekeeper and cook. Clearly I have enough bed pillows, but really, only two demitasse spoons? This is my plague journal. I am counting.

Cheryl Derricotte is a visual artist and her favorite mediums are glass and paper. Originally from Washington, DC, she lives and makes art in San Francisco, CA. Her art has been featured in the New York Times, The Guardian, The San Francisco Chronicle, MerciSF and the San Francisco Business Times.

Francisco Individual Artist Commission and the Hemera Foundation Tending Space Fellowship for Artists. Glass awards include the the Rick and Val Beck Scholarship for Glass Art Alliance for Contemporary Glass’ Visionary Scholarship. Cheryl was an inaugural Emerging Artist at the Museum of the African Diaspora in 2015/2016, on the occasion of the Museum’s 10th Anniversary.

Cheryl is an active thought leader in the arts. She serves as the Chief Mindfulness Officer of Crux, a nationwide cooperative of predominantly Black and other underrepresented artists working at the intersection of art and technology through immersive storytelling (AR/VR). Cheryl is a frequent speaker about her own work and more broadly, contemporary political art. She loves helping new art collectors engage with the art world to acquire work that is well-crafted and sparks conversation.

Cheryl Derricotte on the Web And Social Media

Here is where to find out more about Cheryl on the web and social media: