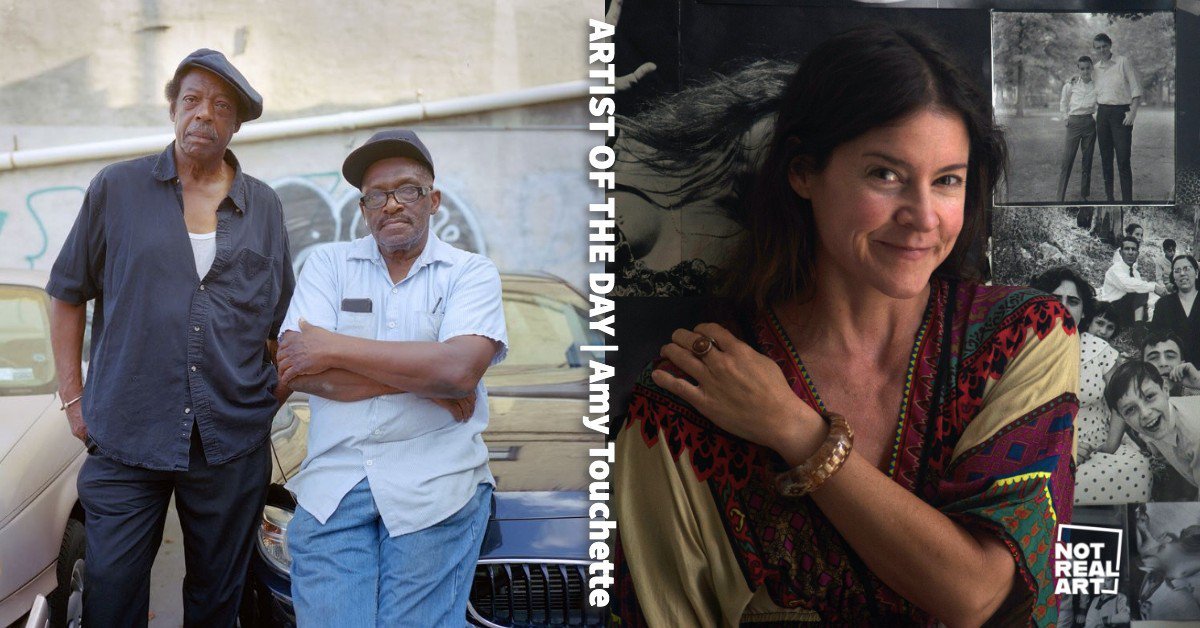 Amy Touchette started out as a writer and painter, but after earning degrees in literature and fine art, she studied photography at ICP in New York. Armed with an antiquated Rolleiflex camera, and rolls of medium-format film, she spent summer afternoons wandering around her Brooklyn neighborhood, photographing people she encountered on the street. Her monograph, “Personal Ties: Bed-Stuy, Brooklyn,” with a foreward by photographer Larry Fink, will be published by Schilt Publishing in Amsterdam this year.

During her twenty-four years in New York, Touchette has found her adopted neighborhood to be the most inclusive and welcoming community she’s ever experienced. She has worked in Vietnam, Japan, France, Mexico, Hawaii, Texas, and the American South, but nothing compares to the sense of connection she feels while photographing people close to home. She feels rooted to Bed-Stuy and is enriched by the diversity of her neighbors. Touchette supports herself by writing for photography-related publications, but after hours of working with words, she finds shooting portraits on the street to be a bonding experience.

I became a street portrait photographer at 30 years of age after a massive awakening to the fragility and value of life. The meaning of life, I now knew, was to feel what it was like to be alive—everywhere, all the time, as much as possible, in as many ways possible. The art of earning a stranger’s trust demands everything of you; every cell in your body a receiver and transmitter; your heart on your sleeve; your eyes in constant search for connection, observation, delight, a kind of joy that presents complexity as beauty, that holds a mirror to you, edifying and teaching. This is where the artmaking lies. The photograph is secondary.

Touchette has exhibited her work in the U.S. and abroad and is represented by ClampArt in Brooklyn and Little Big Galerie in Paris. In addition to working with film, she has an ongoing series of portraits of strangers shot with her smartphone that she releases daily on Instagram. Touchette considers photography a “hopeful exercise,” and does whatever she can to protect its role in her life. Like any artist, she tries to create the strongest work possible, but finds the process of interacting with others as important as the final output. Her dual roles as a writer and photographer give her work a rich sense of storytelling that connects viewers with her beloved neighborhood of Bed-Stuy.

Photography has the incredible ability to unite us. It lets us see one another in a way that real-time life doesn’t offer……And the more we see, the more we understand: We are one. – Amy Touchette

Photographing strangers on the street is like having an epic novel read aloud to you, only it's real. You're connected. You're involved. And you carry every piece of it with you from then on.

I started photographing people in my adopted neighborhood, Bedford-Stuyvesant, Brooklyn, soon after moving here in 2015. I've always used photography as a way of meeting people, and I was especially drawn to the residents of Bed-Stuy, who foster the most inclusive feeling of community I've experienced in my 24 years of living in New York.

Almost every summer afternoon, 2015-2018, from 3pm to sundown, I walked around Bed-Stuy with my Rolleiflex film camera. When I saw someone or a group I wanted to photograph, I'd introduce myself and ask if I could take their picture. Knowing I was a stranger appealing for their time, I tried to make it as quick and easy as possible. I stayed on the side of the street that had the lighting I preferred so they didn't have to be moved, and I took just two frames. For the first one, I'd tell them to look into the lens but otherwise let them present themselves. For the second, I might give them more direction. Sometimes I spoke with people for quite a while, but often all of this would take place within just a couple of minutes. Some people asked for my business card and stayed in touch, but the majority did not. Mostly these were very casual, friendly encounters, the likes of which there are many in Bed-Stuy, albeit not instigated by a camera.

Friends, couples, family members, chosen or not, often caught my eye. Portals into both Bed-Stuy and humanity at large, these acutely personal ties are both unique and universal, and they're also the driving force behind the perseverance of this community.

In street portrait photography, the very fact that exchanges are short and anonymous is what makes them so meaningful. Two strangers are collaborating in the moment, with no expectations and a very distinct, no-strings-attached transmission of trust. It's one of the reasons I often describe street photography as an anti-depressant. Far deeper than a "hello" or "good morning," making a portrait with a stranger is a profound, unique burgeoning of connection that reminds me never to give up on humanity.

Throughout my career, I've photographed in many locations I do not consider home. Vietnam, Japan, France, Mexico, Hawaii, the American South, to name a few. And every time someone let me take their picture I was extremely heartened and humbled by their trust and generosity, especially when there was a language barrier andcommunication took a more creative turn.

But having these experiences right outside my front door, in a place I do call home, whose sidewalks I sweep, and bodega employees I wave to, and collective pain and joy of daily life I seep in, these transmissions of trust become something more: they become personal ties, too.

There is a great deal that these photographs don't show, including the long and winding process and experience of making them: the voices I heard, and faces I saw, and interactions that took place during my many miles of walking the streets of BedStuy that aren't recorded here. I've heard of photographs being like trophies, awards for actually going out there and doing it. But for me, photographs are simply what's shareable of an experience too complex, too multi-sensorial, too much of every aspect of life to possibly impart. They are the cream that rises to the top, while all the rest—all that wasn't photographable—supports and lifts them.

This is a draft of the book cover (still revising). The book is 112-pages and includes 53 color plates.

Amy Touchette is a photographer based in Brooklyn who explores themes of social connectedness through street portraiture. Trained at the International Center of Photography, she began her artistic career as a writer and painter, earning a BA in Literature and Studio Art and an MA in Literature. She is represented by ClampArt in New York City and Little Big Galerie in Paris, France.

Touchette’s photographs have exhibited nationally and internationally, including MoMA-Moscow, Leica Gallery-Warszawa, Hamburg Triennial of Photography, and in the U.S. Embassies in Vienna, Austria, and Ashgabat, Turkmenistan. Images from her latest series, “Personal Ties: Bed-Stuy, Brooklyn,” debuted at the National Portrait Gallery in London, England, 2019-2020, as part of the Taylor Wessing Photographic Portrait Prize exhibition and were included in an article about Amy’s approach to street photography on the influential art site Artsy.

Described by BuzzFeed as “a master of street photography in the busiest of concrete jungles, New York City,” Touchette gives artist lectures and public talks on the topic of photographing on the street, most recently at B&H SuperStore, as well as at UCLA Extension, School of Visual Arts, the International Center of Photography (ICP), Spazio Labo' Centro di Fotografia, City College of New York, and Adorama camera store. She teaches street portraiture in ICP’s full-time Documentary Practice and Visual Journalism program and continuing education program.

Touchette also works as a freelance photography writer for publications such as PDN, PDNedu, Rangefinder, Emerging Photographer and Digital Photo Pro magazines, and wrote a series of articles about street photography for the tutorial website EnvatoTuts+.

She's currently at work on several medium-format street photography series, as well as “Street Dailies,” her ongoing series of un-posed smartphone portraits of strangers, which are released regularly on Instagram. Her most recent project is a poker-sized deck of playing cards culled from Street Dailies that celebrates New York City’s residents. Each card features a unique portrait, and each suit comprises a set of some of her favorite muses: grannies (spades), workers (diamonds), twins & sets (clubs), and beloved, quintessential NYC characters (hearts).Amy on the Web And Social Media

Here is where to find out more about Amy Touchette on the web and social media: