How Abby Aceves Explores the Role of Women in Patriarchal Culture 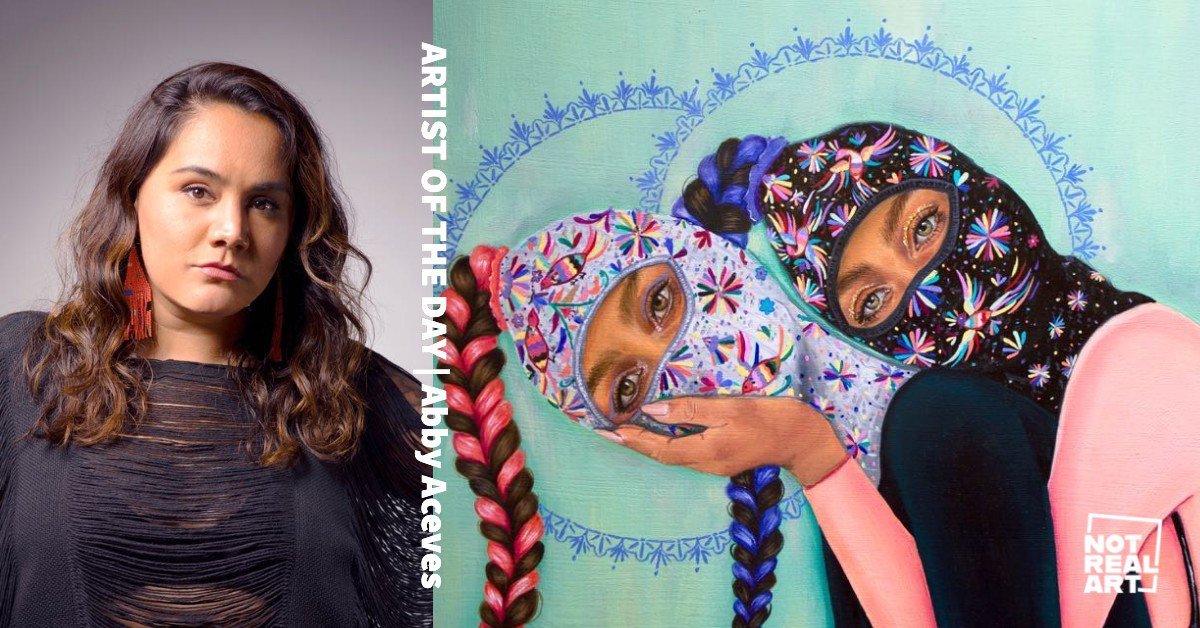 Abby Aceves is a contemporary artist from Mexico who has lived in Los Angeles for the past three years. She addresses the role of women in a patriarchal culture through painting, drawing, sculpture, and installation art. Her portraits of powerful female figures, past and present, explore how feminist ideals have evolved over time from the perspective of a young woman artist navigating her transition to the U.S.

The first thing that stands out when viewing a painting by Abby Aceves is the intensity of the subject’s gaze. From her profile of an indigenous commandant of the Zapatista Army, to a portrait of a friend with intriguing tattoos and ravens on her shoulders, or a painting of her great-grandmother in a multi-colored shawl, her work commands attention. The women who inhabit her canvases exude strength and beauty on their terms.

Born in Mexico, and raised by a single mother, Aceves started out in the fashion world before turning to fine art. Inspired by the women around her and historical figures, including Soviet women who fought during World War II and Latin American activists, she has created a compelling series of portraits that challenge traditional notions of femininity. Drawing from the struggles of her gay mother in a repressive society, and her great-grandmother, who was cut off from her family after migrating to the U.S., Aceves pays homage to those who have come before her while moving forward in her own right.

Abby Aceves applies figurative elements, color, and composition as a language to communicate the role of women in a patriarchal society, while addressing themes of oppression and beauty in Mexican culture. With a mysterious narrative, each character has a full complex personality. Her technique centralizes in oils and mix media.

My work is a reflection and representation of my upbringing, ideology and experience as a feminist artist. I was raised by a single homosexual mother. This chapter in my life gave me so much love and joy, but it also gave me a lot to learn from. I witnessed firsthand the struggle, pain, and social exclusion that my mother had to deal with and still has to occasionally. I think if it wasn’t because I lived this experience, I would have never thought analytically about gender-based struggles, even in our own society, with acceptance and resources. Therefore, I have always, and will continue to stand for the LGBTQA+ community. I believe that love and respect is genderless. I also believe in the social, economic and political equality of the sexes, the deconstruction of patriarchy and gender roles. Everyone is born equal, regardless of gender, race, or sexuality. Being a feminist artist is a great tool, it has helped me advocate, discuss, and educate others in order to help make the world a better place. I also I feel the importance of making proper representation and empowerment of POC through my artwork. My culture, background, and race are strengths I carry within myself and portray through my artwork. My history empowers me. – Abby Aceves

Comandante Ramona was a Tzotzil indigenous activist woman and commandant of the National Liberation Zapatista Army (EZLN) in Chiapas, México. She led the rebels into the town of San Cristobal de las Casas on New Year’s Day 1994 demanding indigenous rights for the people of Chiapas while protesting the North American Free Trade Agreement (NAFTA) which came into effect that day. The EZLN in their efforts called for land, jobs, housing, food, healthcare, justice, and democracy, while demanding that an end be put to the hundreds of years of exploitation and marginalization of indigenous peoples and peasants of Chiapas.

Ramona became an empowering figure among the indigenous women in Chiapas. She promoted human rights for women, writing along with other women of diverse communities of the state of Chiapas the "Revolutionary Law for Women" in 1993. She died near San Cristobal, Mexico on January 6, 2006 due to kidney failure.

Isadora is a friend of mine from back home. She is wearing my great-grandmothers shawl in this portrait.

Sororidad (Sisterhood) is alliance between women that propitiates trust and support. Leads to the search for positive relationships with other women, to contribute to the social elimination of all forms of oppression and for mutual support to achieve vital empowerment of each woman. I dedicate this piece to all women. Especially the ones who fight for all of us.

Inspired by the winner of the Nobel Prize in Literature, “The Unwomanly Face of War” AN ORAL HISTORY OF WOMEN IN WORLD WAR II by SVETLANA ALEXIEVICH. In The Unwomanly Face of War, Alexievich chronicles the experiences of Soviet women who fought on the front lines, on the home front, and in the occupied territories. These women (more than a million in total) were nurses and doctors, pilots, tank drivers, machine-gunners, and snipers.They battled alongside men, and yet, after the victory, their efforts and sacrifices were forgotten. The book narrates the many stories of surviving women that fought, many 14, 15-year-old girls barely hitting puberty. Most of them would come out of the war looking way older with gray hair. They had to deal with menstruation, rape, family, and children. After the war, they did not see these women as marriage material rather than “damaged goods”. Alexievich traveled thousands of miles and visited more than a hundred towns to record these women’s stories. Together, this symphony of voices reveals a different aspect of the war—the everyday details of life in combat left out of official histories.

I made this portrait of my great grandmother Zenaida as a gift for my mom who migrated to US 35 years ago and unfortunately her migratory situation is not the best so she hasn’t been able to go back to her country and visit her family. The last time she saw her grandmom was about 20 years ago and sadly didn’t have the opportunity to say goodbye when she passed away, so I made her this portrait of our abuelita Zenaida so she could see her every day. I took care of my great grandmother until her last days, she would tell me stories of her youth that where so interesting. The last time I saw her was in a dream, she had come to say goodbye to me; it was in a house made out of straw and a lava river past in the middle of it, in the house her coffin laid in the middle covered with cempasuchil flowers and with her inside of it, but she also stood beside me holding my hand saying everything would me ok.

Abby Aceves is a Mexican artist who has lived in Los Angeles for the last three years. She has a Bachelor’s degree in Fashion Design and Styling from Centro Superior de Moda y Estilismo Edith Martin (Advanced Center in Fashion and Styling Edith Martin), Jalisco, Mexico. She worked in the fashion industry for seven years with her own label, before deciding to pursue a life in visual arts.

Abby On the Web And Social Media

Find out more about Abby Aceves on the web and social media: